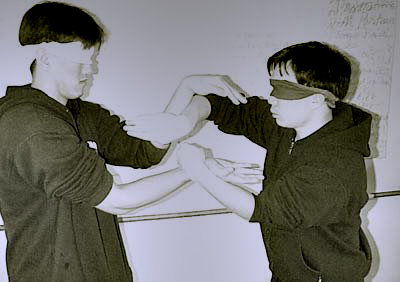 "To hear is to be lie to, to see is to be deceive , feeling is believing." quoted from Bruce Lee.

This is a statement that impacted me very much, I used it as my guiding stick for my 40 years of Martial Arts training, it included 20 years of study and training in JKD, I must say it helped me realized what is the truth behind all the preachers, and see through all the commercial smoke screens.

As I heard a story about my respectful JKD grandmaster Jerry Poteet, a very honorable teacher, who had first met Sifu Tom Wong in the early 80s, (Jerry was a direct student of Bruce lee), and he followed his famous teacher and said "…feeling is believing!" and " …most classical Kung Fu is a mess…" after hours of discussion of Wing Chun Kung Fu Theory with Sifu Wong. Sifu Wong was from China, very reserved, polite, and he never showed aggression. Jerry was pushing for a test (feeling), so they crossed hands, Sifu Wong suddenly executed an explosive Lap Sao (grabbing hand) with out any significant movement (less than 1 inch), Jerry was brought over airborne and landed to the back side of Sifu Wong.

Wow, I had never felt that since Bruce!…"

Jerry realized that if it was a one inch punch toward his body, He would have experienced serious injury!

Why should I believed this story? Because I had witnessed it happen the other way with a punch!

Once I invited my friends and Sifu Wong over a party at my back yard. One of our friend was a 3rd degree blackbelt in Taekwando, after a few drinks he demonstrated his Iron Head by banging it against the table very hard, it shocked everyone! Everyone cheered, then everyone naturally turn to Sifu Wong and I said, "lets see some one inch punch from Sifu Wong". He declined, then everyone was already kind of excited after seeing the Iron Head, and wouldn’t stop yelling "come on, come on, lets see some Kung Fu", whistling, and asking "Any volunteers?". A large guy named Charles raised his hand and said, "I get to punch first!…OK?". I asked Sifu Wong if that is OK. Charles got to punch 10 times, in exchange for Sifu Wong’s one punch.

Sifu Wong had a few drink by now. "Sure…", he said. Charles agreed, "It's a deal!". Everyone cheered!

Charles was counting his first 10 punches landing on to Sifu Wong’s chest with his best shot, "One! Two!...Nine! Ten!". Now it was Wong's turn.

I pulled out a sofa and placed it 5 ft behind Charles. Everyone got out of their seats and stood around in a big circle. Charles felt something different, he is a little apprehensive, "What are you doing?", he asked. I said, "I want to make sure you land comfortably, that’s all". Charles is a tough guy and thinks Kung Fu is a joke for little guys. "Ok, I am ready", Charles said manly. Everyone stopped breathing and focused at Wong’s fist.

Suddenly, Charles flew to the sofa behind him and passed out! Wow, frankly, I only expected Charles would stumble back a few steps being 6'4". Everyone was calling "Charles! Charles! Charles!". He wasn’t breathing! Maybe minute later, it felt like a long minute, Sifu Wong kept smacking Charle’s face. Sifu Wong pressed his pressure points, and then Charles woke up, started breathing heavily, then vomited. "He is ok, he is ok!" Everyone was relieved, Sifu Wong was relieved and said, "I am sorry...are you ok?". Some people started sobbering.

After that incident, Sifu Wong demonstrated much more control with his power on his students. But Charles is not the only one who experienced Wong’s power! Wong’s younger days are never short of exciting stories.